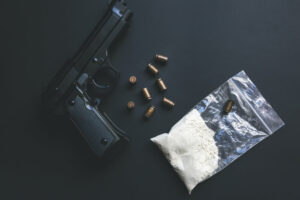 New Jersey is known for its strict gun laws.  The firearms possession penalties during a crime’s commission carry stiff penalties.  The penalties are even more severe for possessing a firearm while committing a drug crime, such as distributing a controlled dangerous substance (CDS).  Carrying a handgun while participating in a drug crime could result in an additional charge of unlawful firearm possession.  A certain persons offense could be added if the person in question was legally prohibited from owning a firearm because of their criminal record.  Additionally, this offense includes using weapons that are not firearms when committing a CDS offense.

The “drug and gun law” stipulates that possessing a firearm or other weapon while attempting to commit, conspiring to commit, or committing a drug offense is a second degree offense.  The actions associated with this charge are possession with intent to distribute CDS, distribution of CDS, and distribution of a CDS within 500 ft of public property or within 1,000 of school property.  Also included are employing a juvenile to distribute a CDS and maintaining or operating a drug production facility—any actions committed while possessing a gun or other weapon fall under this statute.

According to 2C:39-4.1(a), the three elements required are that the crime involved a firearm, and the defendant had it in their possession while they were committing, attempting to commit, or conspiring to commit a drug-related offense. What is a firearm?  It is a weapon from which a projectile using a cartridge or shell may be ejected using flammable or explosive substances, such as a pistol, handgun, semi-or automatic rifle, shotgun, or machine gun.

What is Considered Possession for the Purposes of a Weapons and Controlled Substances Offense?

What is Considered Intent for a NJ Firearm Possession and Drug Distribution Offense?

The last element is that the defendant had the firearm while conspiring to commit, attempting to commit, or committing a drug crime.  “Conspiring to commit” a crime means the defendant had the weapon with the purpose of using it to commit a drug crime and agreed with other people to aid them or solicit their participation in the act.  “Attempting to commit” a crime is the actions leading up to the drug crime in question, such as driving to a particular place and parking to wait for someone to meet you to distribute a CDS. Of course, “committing” an offense is acting purposefully to commit a drug offense, such as selling a CDS to someone.

2C:39-4.1 (b) and (c) require the state to prove the defendant had a weapon for an unlawful purpose or was in illegal possession of a weapon when the violation occurred.

This law has an unusual section of the statute that is rarely seen. It states that any additional convictions the defendant receives must be served consecutively.  Usually, a judge will allow several charges to be served concurrently.  For example, if the defendant broke into a store and stole various items, the sentence for burglary and theft-related actions might be combined because they were committed in the same instance. But this law is intended to bring the hammer down on those who commit CDS offenses while armed.  For example, if the defendant had a handgun and was arrested while manufacturing heroin, they could be charged with the manufacture of a CDS, possessing a firearm while manufacturing a CDS, and possessing illicit materials with intent to manufacture a CDS.  Each charge has separate sentences, which must be served one after the other. 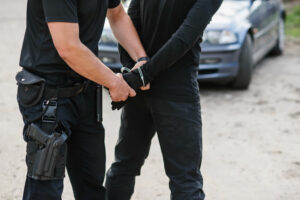 In State v. Harris, Ron Ray Harris was walking down the street with a friend as he counted what appeared to be a large amount of cash.  This caught the attention of a nearby police officer as the area was well-known for drug-related activity. Harris and his friend, aware that they had caught the attention of the police, went down an alleyway. The police officer followed and began to talk with both men.  Noticing that Harris had something in his mouth, the officer told him to spit it out.  It was a baggy with a small amount of marijuana.  Both suspects were searched, and a small pocket knife and $1324 cash were found on Harris.  Both men were arrested. At the police station, Harris was strip-searched, and a sizable amount of cocaine was found between his buttocks.  He was charged and convicted of second-degree possession of cocaine with intent to distribute within 500 feet of public property, second-degree possession of a knife while committing a CDS crime, a third-degree hindering charge, possession of a weapon by a previously convicted person, and a disorderly persons offense for the possession of marijuana.  The total of his sentence was 21 years in prison.

Harris submitted a motion to suppress the evidence found on his person at his arrest and during the strip search.  He also appealed the possession of a weapon while committing a CDS crime and the other weapons charges. The judge concluded that the evidence found when Harris was searched in the alleyway was admissible because the officer had probable cause.  Harris was a known drug dealer, and as he talked, it was clear that he had something in his mouth.  The pocket knife was found during the frisk done by the police before taking a suspect into custody. However, the judge did not believe that the strip search conducted at the police station was legal because there was not enough evidence to support that Harris was hiding drugs in his body.

Harris contended that the weapons charge was bogus, and his appeal was granted. Harris was not found to have used the weapon unlawfully.  A small, ordinary, folded pocket knife, the court said, was not held by Harris, nor did he attempt to use it during his arrest. The appellate court reversed the convictions for third-degree possession of a CDS with intent to distribute, second-degree possession of a CDS with intent to distribute within 500 feet of public property, and second-degree unlawful possession of a weapon while in the course of committing a CDS crime.

Merger of Sentences vs. Double Jeopardy for NJ Drugs and Guns Charges

Heriberto’s appeal had three main ideas.  The first was that he could not be convicted of possession with intent to distribute within 1,000 feet of a school and a separate charge of 500 feet of public property because it was double jeopardy.  To begin with, double jeopardy has to do with being tried twice for the same crime and not for being convicted of similar crimes. The court agreed that the sentence for the two charges should be merged as Soto simultaneously committed the crime in one specific spot.

Second, he claimed that the firearm possession charge and the possession of a firearm while committing a narcotics offense were basically two charges for one action, which was unconstitutional. The court ruled that the two charges were different because one had to do with the drug crime of being close to a school while possessing a firearm, and the other had to do with his illegal firearm possession. Thirdly, Soto argued that the sentences given for each conviction could not be served consecutively because that also constituted double jeopardy.  The court disagreed, saying that consecutive sentencing was constitutional for each separate charge.

Talk to a Newark Lawyer Defending Firearms and Drug Charges

There is no getting around it; being charged with drugs and weapons crimes is serious stuff. A criminal conviction can ruin your life, leaving you with a criminal record, which could make finding a job difficult. Mandatory sentencing minimums and consecutive sentences mean real time if you are convicted. The criminal defense attorneys at our Essex County criminal defense firm know how intimidating and stressful it is to have charges pressed against you. The most important thing you can do is to contact our firm immediately to get started on your defense. Our attorneys will work your case from every angle to get you the best possible result in Montclair, South Orange, West Orange, Nutley, Belleville, Newark, Verona, Livingston, and throughout Essex County. We know our way around a courtroom and are passionate about defending our clients.

There is no time to waste if you have been charged with possession of a weapon while distributing drugs in New Jersey. Call our Newark office today at 201-654-3464 for a no-cost consultation to get started on your defense.