Drug Distribution & Possession of CDS with Intent to Distribute 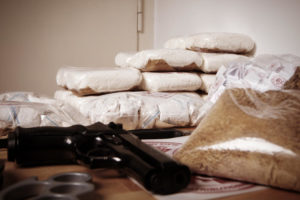 There are many different kinds of drug charges that apply in New Jersey, one of the most serious of which is drug distribution and possession with intent to distribute. When you have been charged with a crime for selling drugs, manufacturing, trafficking, or possessing controlled dangerous substances with intent to distribute or dispense, the degree of the charges will depend upon the kind of drug or drugs involved, as well as the amount. In some cases, first degree drug distribution can land you in New Jersey State Prison for up to 20 years. In others, third degree possession with intent to distribute may be resolved through enrollment in Pre-Trial Intervention, if it is the defendant’s first offense. If you have been charged with a violation of NJSA 2C:35-5, discussing your specific situation with an experienced criminal defense lawyer is paramount. You should know what you are facing, your options, and the defenses that may be used to get your charges dismissed.

At The Tormey Law Firm, our talented team of Essex County criminal defense attorneys have defended clients charged with drug distribution in Bloomfield, Nutley, West Orange, Belleville, Livingston, Montclair, Millburn, Maplewood, and surrounding towns for over a decade. With a practice dedicated entirely to criminal defense, we serve on the front lines of the criminal justice system, vigorously defending our clients’ rights in Essex County Superior Court and courts across New Jersey. Contact our local office in Newark for a free consultation about your drug distribution or intent to distribute case and begin developing your best defense. You can reach us online or by calling 201-654-3464 24/7 for immediate assistance.

Any drug classified as a controlled dangerous substance (CDS) can become the subject of an investigation, search, and criminal case for drug distribution, manufacturing, and possession with intent to distribute in NJ. New Jersey uses the Schedule of Drugs to determine the kind of charge that will apply when someone is accused of either possession with intent to distribute, trafficking, or drug distribution. This includes most drugs that you have heard of, like marijuana, heroin, and cocaine, as well as steroids, depressants, prescription narcotics, and stimulants.

Specific controlled dangerous substances that may be involved in a drug distribution case fall within Schedules I, II, III, IV, and V. Some common reasons for charges for illegal manufacturing, dispensing, or distributing include drugs such as: cocaine, heroin, methamphetamine, ecstasy/MDMA, LSD, marijuana, and synthetic marijuana. It is also unlawful to distribute or possess with intent to distribute Schedule II drugs like Percocet, Methadone, Fentanyl, Oxycodone, Codeine, Morphine, and Vicodin.

In addition to the kind of drugs named in an offense of this nature, other circumstances at the scene of the arrest will be important for how police decide how to charge the crime. If a large volume of different kinds of drugs are also found, this could further complicate the number and type of offenses, since each individual offense carries its own penalties and presumptions. For example, you may find yourself facing charges for drug trafficking when leading or participating in a large-scale operation with multiple people; intent to distribute drugs found in your vehicle; or maintaining or operating a drug production facility.

In general, possession charges for drugs carry less severe penalties than drug distribution or possession with intent to distribute offenses. As a result, officers often look for small details in a case that could allow for the charging of the more serious crimes. Even one small issue noticed by an officer at the scene of the arrest can elevate what would have been a drug possession charge, to the level of possession with intent to distribute. For instance, having a large amount of cash on you at the time of the arrest could lead to drug distribution charges, even if you were not in the act of making the sale of a controlled dangerous substance.

What are the Punishments for Drug Distribution in New Jersey?

The penalties for intending to sell, possessing with the intent to distribute, drug dealing, and manufacturing all fall under the same statute, NJSA 2C:35-5. The drug involved can change the penalties, however.

If you are caught trying to sell or distributing less than one-half of an ounce of cocaine or heroin, you can face a fine up to $75,000 and up to 5 years in prison. For more than a half ounce but less than 5 ounces, up to 10 years in prison and up to $75,000 in fines might apply. For more than five ounces, you can face fines up to $500,000 and face a prison sentence up to 20 years.

Other penalties apply when the distribution is near a public park, public housing facility, or within 1,000 feet of a school.

The evidence in the case, as well as how the drugs were identified and collected, is very important for criminal defense strategies. A knowledgeable criminal defense attorney with an understanding of drug distribution charges and prosecution tactics will be very helpful to you if you have been accused of a crime like this. For example, one of the most common strategies used by an experienced criminal defense lawyer is to argue that only a possession charge, rather than drug distribution or possession with intent to distribute, should be issued in a given case. Other potential defenses may be used to suppress important evidence due to an illegal search, lack of probable cause, problems with the lab report, or issues with the chain of custody.

If you have been accused of drug distribution, manufacturing, trafficking, or possessing with intent to sell in Essex County, and you need help determining your next steps, a phone call with an experienced lawyer should be your next step. An attorney at our firm who knows the nuances of these cases can provide you with a more thorough explanation of what to expect and what you can do to successfully defend your innocence. Contact us today at 201-654-3464 for immediate assistance. Consultations are entirely free of charge and a member of our team is available immediately to assist you.