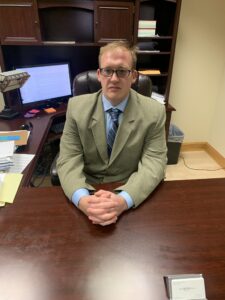 Jeffrey Skiendziul is a talented New Jersey gun lawyer with ten years of experience appears on behalf of clients in courts across the state. He joined the Tormey Law Firm in 2021, where he represents clients on matters relating to the Second Amendment, including appealing Denial of Firearms Permits, Weapons Forfeiture Hearings on behalf of clients related to either Domestic Violence and Restraining Order matters, and Temporary Extreme Risk Protective Orders, as well as addressing questions related to the Second Amendment concerning transportation, storage, possession, purchase, and inheritance of Firearms in New Jersey.

Jeffrey Skiendziul attended Arcadia University, where he graduated with a bachelor’s degree in political science and a Minor in Pre-Law. Upon graduating Arcadia University, Jeffrey enrolled in and graduated from Thomas M. Cooley Law School with his Juris Doctorate with a concentration on Litigation.  After graduation from law school, Jeffrey passed the New Jersey Bar Exam and became licensed to practice law in New Jersey. In addition, Jeffrey is admitted to practice before the United States Supreme Court.

Previously before joining the Tormey Law Firm, Jeff worked for one of the premier gun rights law firms in New Jersey and he has personally handled hundreds of gun permit applications, gun permit denial appeals, and domestic violence restraining order matters in his distinguished career.

Personally, Jeffrey is a former NCAA Division III Swimmer while enrolled in college. He is a Master Mason – 3rd Degree at Durand Lodge # 179. Jeffrey is involved in other organizations such as POAC, which aid people and their families who have relatives diagnosed with Autism Spectrum Disorder (ASD). Jeffrey is also bilingual, who can speak Polish.  Adwokat mowi po Polsku.

Here is a review from one of Jeff’s many satisfied clients whose case was successfully handled:

Very knowledgeable and punctual, Jeffrey was pleasant to work with. He represented my son and I in separate traffic violation cases. I was extremely satisfied with the outcome and minimum fine he fought for me. I would recommend him to anyone looking for professional representation