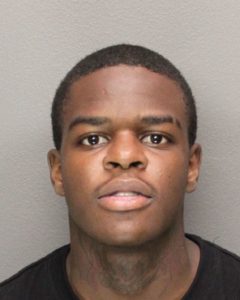 The suspect is an 18-year-old resident of East Orange, NJ. According to law enforcement officials, the suspect is a member of the Bloods street gang.

Essex County Sheriff’s officers noticed that the suspect’s 2017 Kia Optima was double-parked near the intersection of Sussex Avenue and Steuben Street in East Orange, New Jersey. The officers ran a computer check on the car and learned that it had been reported stolen in Newark.

When police attempted to pull over the car, the driver allegedly hit the gas pedal and sped away. The car eventually came to a stop when it crashed into another vehicle on West Market Street in Newark, NJ. The force of impact caused the suspect’s motor vehicle to leave the roadway and slam into a construction site fence.

Four men reportedly got out of the vehicle after the crash and tried to flee the scene on foot. Police quickly captured the main suspect, who was hobbled by an injured leg.

The suspect was subsequently placed under arrest and charged with several crimes, including unlawful possession of a weapon, possession of a defaced weapon, receiving stolen property, and eluding law enforcement. The suspect was also cited for various traffic offenses, such as double parking, driving without a valid license, reckless driving, and leaving the scene of an accident.

After being arrested and processed, the suspect was remanded to the Essex County Correctional Facility in Newark.