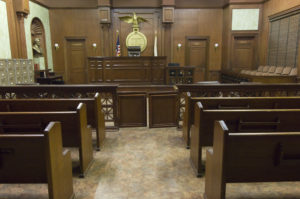 If you have been arrested for a first, second, third, or fourth degree crime, or charged with a disorderly persons offense in Essex County, we encourage you to call our seasoned criminal defense lawyers at 201-654-3464. for a free consultation about your case. With local offices in Newark, NJ, our attorneys regularly represent individuals facing criminal charges in Livingston, Nutley, Montclair, Millburn, West Orange, Bloomfield, and nearby areas.

In order to be prosecuted for an indictable crime in New Jersey, a grand jury must examine the case and then determine that it has enough evidence to support a formal charge and ultimately go to trial if the case cannot be resolved during pre-trial proceedings. The grand jury will provide a written determination if they decide there is sufficient evidence against you, which is called an indictment. This indictment will include the specific offense or offenses and the degree of the crime or crimes. Below are the degrees of crimes in New Jersey, as well as the potential penalties and a few examples of each.

What is a First Degree Crime?

This is the most severe category of crime and there is a presumption of incarceration. Punishments can include between 10-20 years in prison, and up to a $200,000 fine. First degree crimes in New Jersey include armed robbery and aggravated sexual assault.

What is a Second Degree Crime?

Second degree crimes in New Jersey include aggravated arson, armed burglary, certain drug crimes involving significant quantities, and sexual assault. This category of crime is also very serious and brings with it a presumption of incarceration. Punishments can include 5-10 years in prison, and up to a $150,000 fine.

What is a Third Degree Crime?

Third degree crimes in New Jersey include possession of many controlled dangerous substances (with the exception of marijuana),  and theft between $500 and $75,000. While these offenses can be serious, there is not a presumption of incarceration for first offenders. Punishments can possibly include 3-5 years in prison, and up to a $15,000 fine.

What is a Fourth Degree Crime?

Fourth degree crimes in New Jersey can be serious, however, there is not a presumption of incarceration for first offenders. Punishments can include a possible maximum sentence of 18 months in prison, and up to a $10,000 fine. Common fourth degree charges include some theft offenses, stalking, and forgery.

Sentencing for Felonies in New Jersey

In all of these cases, the New Jersey courts have a certain amount of discretion regarding the actual sentencing of a defendant. For example, if you are a first offender for a third or fourth degree crime, you may be eligible for probation or a specific diversionary program such as Pretrial Intervention or Drug Court. Courts can also allow a defendant to serve all, or a portion, of a sentence on probation rather than prison.

While courts are allowed to offer leniency in sentencing for first time offenders and for lesser crimes, the opposite is also true for more heinous or severe crimes. There are cases in which the courts are required to sentence an offender to a minimum amount of prison for specific crimes under certain circumstances. A judge may have the option to sentence a defendant with the maximum amount possible if the crime is particularly egregious.

While New Jersey uses the term “crime” to relate to the indictable (felony) crimes, the state uses the term “offense” to refer to these disorderly person offenses. These crimes are essentially criminal misdemeanors in other states. These less serious offenses are typically punishable by six months or less in jail.

What is a Disorderly Persons Offense?

Disorderly person offenses are the more serious of non-indictable criminal offenses and can include possession of marijuana under 50 grams, simple assault, and shoplifting less than $200. These offenses are typically punishable by up to 6 months in jail and a fine of up to $1,000.

Need Help with a Criminal Case in Newark?

If you have been arrested and charged with any type of criminal offense in Essex County or elsewhere in New Jersey, talking to an experienced criminal attorney can help you understand your rights, build your case, and provide you with strong representation. Contact our experienced criminal defense firm with offices in Newark for immediate assistance. You can reach us anytime by calling 201-654-3464 for a free consultation with a lawyer who can help.