Types of Illegal Weapons that can get You Arrested in NJ 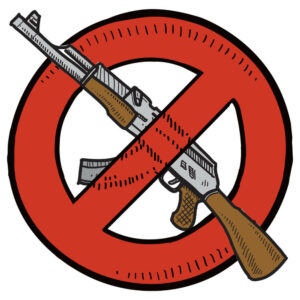 Whether for recreational shooting or protection, shotguns, rifles, and handguns are available to New Jersey residents. Those who wish to purchase guns can legally do so by passing the background checks, filling out the paperwork, and paying the fees. You go to the local police department, fill out your application, get fingerprinted, provide two references, and consent to a background check. Then, you wait for a review of your application and must be approved to get your firearms purchaser identification card. Then, armed with your firearms purchaser identification card, you can visit your local gun retailer. You’ll need that to buy a handgun, shotgun, rifle, or BB gun. A handgun requires a separate permit, however, if you wish to carry the gun on your person. The law governing registration and gun ownership anticipates that most people use guns reasonably and not to mow down innocent bystanders by the dozens, as has been the case in some mass shootings throughout the nation. Therefore, with safety and protection against those types of shootings in mind, New Jersey bans certain weapons from purchase by non-military, non-law enforcement individuals.

Specific individuals may not purchase or own weapons in New Jersey.

This includes certain persons not to have weapons. For example, those convicted of domestic violence or subjects of restraining orders generally lose their right to access to firearms. But other than those expressly excluded, it is not outright illegal to own a weapon in the state of New Jersey. Unadulterated rifles, shotguns, and handguns require firearms purchaser identification cards, and handguns may require handgun carry permits and firearms purchaser identifications cards, along with a background check and fingerprinting. No permits or identification cards can issue to those convicted of many crimes such as aggravated assault, robbery, burglary, and child endangerment, as well as drug addicts, the mentally disordered who were institutionalized, alcoholics, or anyone else considered a danger to handle firearms. However, even those with alcoholism and mental disorders can prove rehabilitation by a professional to purchase a gun.

Regardless of your background, no one may transfer or purchase assault weapons, whether automatic or semi-automatic, and large capacity magazines capable of loading a lot of ammunition into a firearm. New Jersey bans 30-plus assault weapons. Included among the prohibited weapons are continuous fire military rifles, as well as semi-automatic single-fire-per-trigger-pull weapons. In addition, names such as Algimec AGM1, Striker 12 rifles, Armalite AR-180, Australian Automatic Arms SAR Beretta AR-70, and more are specifically outlawed (N.J.S.A. 2C:39-1). And it is illegal to have a magazine that automatically loads a weapon with more than ten rounds of ammunition, which is considered a large-capacity magazine. For semi-automatic shotguns, New Jersey law designates large capacity as six rounds. It is also illegal to possess a sawed-off shotgun or defaced firearm.

The aim of the prohibition on large-capacity magazines and automatic or semi-automatic weapons is to keep weapons capable of fire bursting, with or without adaptations, out of the reach of the general public. Adaptations to increase firepower in ordinary weapons include folding or telescoping stock, bump stock, pistol grip that extends below the weapon, bayonet mount, flash suppressor or threaded barrel for a flash suppressor, and a grenade launcher. These adaptors may be necessary if you are active duty military or a police officer. As such, law enforcement and military personnel are exempt, to a certain extent.

If a weapon has two adaptive features that turn an ordinary rifle, shotgun, or handgun into a high-powered, rapid-fire destructive machine, the weapon is prohibited. Even a pistol can turn into a super-loaded gun with lots of ammunition when modified with add-ons like the extended magazines, flash suppressor, or barrel extender. These military-grade or modified weapons can cause quick destruction of life and property and are therefore banned.

Penalties for assault firearms and illegal ammunition are extensive in NJ.

Possession of a large-capacity magazine is a fourth-degree crime punishable by up to 18 months in prison and a $10,000.00 fine. And it is a second-degree crime to possess an illegal handgun or assault rifle, meaning weapons for which you have no permit or proper registration or which New Jersey outlawed. If caught with a prohibited weapon, you could spend up to ten years in prison. In addition, a judge cannot shorten your sentence, meaning you cannot benefit from early parole since weapons violations are subject to the Graves Act’s mandatory minimum sentences. The Graves Act governs the unlawful possession of a machine gun, rifle, handgun, or shotgun. It requires mandatory minimum sentences of 42 months for a first offense and five to ten years for a second or later offense for a second-degree crime. There are ways to avoid the Graves Act, namely by securing a Graves Act Waiver, which is an important skill of experienced weapons defense lawyers such as ours.

What Happens when you get Arrested for an Assault Weapon in Essex County, New Jersey

If arrested for possessing an illegal assault weapon weapon found in your car, in your home, or on your person, you will taken to to jail to await a hearing on whether to release you from jail. You could potentially stay in jail until you are cleared or convicted at trial. To help you secure your release, you want to hire a criminal defense attorney to appear at your detention hearing. There, our criminal lawyers can present evidence to show why you should be released. In addition, we can speak on your behalf, explaining how you have no record of missing court appearances and have ties to the community. If you are not a flight risk and are likely to appear at your court-ordered hearings, the judge may let you go or let you go with supervision or monitoring until your next court date.

Beyond that, our criminal attorneys can strategize with you on your defense. After hearing your relation of the facts surrounding the charges and your arrest and reviewing the evidence, there may be ways to challenge components of the prosecution’s case. If the officers did not follow the law in stopping, searching, or arresting you, we may be able to make a motion to have the evidence suppressed. The motion requests that the judge disallow the prosecutor to use evidence obtained by the police in arresting you. Depending on the facts and circumstances, we can map out for you the options of getting the case dismissed for illegal actions of the law enforcement or other state actors, obtaining a Graves Act Waiver to achieve a better sentence, or fighting the charges at trial.

Contact our Newark Assault Weapons Attorney if You are Facing Charges

If the police arrested you for an assault firearm, rifle, illegal weapon, large capacity magazines, or ammunition, make sure our Essex County criminal defense attorneys are among the first people you or your loved ones contact. We defend clients facing charges in Newark, Montclair, West Orange, Bloomfield, Cedar Grove, Caldwell, Maplewood, and other towns throughout the Essex County, NJ area. Contact 201-654-3464 for a free consultation today.

Understanding a Shoplifting Case when You are Facing Charges

Criminal and Motor Vehicle Charges from a Traffic Stop: What Happens if it goes Wrong