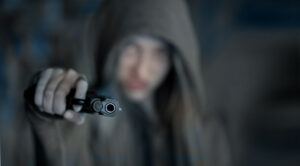 Undeniably, youth make mistakes, playing with BB guns, Airsoft rifles, or paint guns their friends offer them, without realizing the legal requirements for permits to buy or possess certain weapons. They may not realize the laws apply to New Jersey adults and minors. When minors get caught with firearms, they face the consequences in the juvenile justice system since New Jersey prohibits those under 18 from owning or possessing firearms. Those under 18 may not possess firearms, including long guns and handguns. Moreover, a permit applicant must be 21 or older to get a handgun unless having a weapon is part of their job. So, when the police catch a juvenile with a firearm, they may face a judge and detention, depending on the circumstances. If this happens to your child, contact our accomplished juvenile weapons defense attorneys for immediate assistance.

We will go toe to toe with prosecutors who try to come down hard on children accused of possessing firearms and other weapons in Essex County towns such as Newark, Livingston, Bloomfield, Millburn, Nutley, South Orange, Maplewood in the greater New Jersey area. When your son or daughter has been charged with unlawful possession of a weapon, possession of a firearm by a minor, possession of a weapon for an unlawful purpose, armed robbery, aggravated assault, pointing a gun, or another offense, get in touch with us right away for the help you need protecting their rights and their future. Call 201-654-3464 for a no-cost discussion with an attorney.

Juveniles Possessing a Handgun Without a Permit in NJ

N.J.S.A. § 2C:58-6.1 prohibits minors from acquiring firearms. An individual must be 18 to get a Firearm Purchaser Identification Card (FPIC) and 21 to get a handgun permit. Thus, if the police catch a juvenile with a handgun, they may face fourth degree charges for having a gun while underage. In New Jersey, anyone who wants a handgun must have a license. And anyone who enables a minor to have a firearm is guilty of a third degree crime.

Possession of Unlicensed Guns for Minors Charged as Adults in NJ

For minors charged as adults, having unlicensed guns is illegal and the punishment depends on the gun. For example, possessing machine guns and assault rifles are second degree crimes with potential ten-year prison sentences, and certain semi-automatic pellet guns, BB guns, Airsoft rifles, as well as rifles and shotguns without FDICs, give rise to third-degree criminal conviction. In addition, it is a fourth-degree crime to unlawfully possess other weapons in New Jersey.

Further still, a minor who brings a firearm onto school grounds faces a third degree crime, even if the individual has a permit. And that applies to fake guns; bringing imitation firearms on school grounds is a fourth degree crime. Additionally, possessing weapons for an unlawful purpose is a second degree crime, so a minor with a handgun intended for burglarizing a car faces a second degree criminal conviction. Using an imitation firearm to commit an offense is a fourth degree crime. Moreover, if the minor’s weapon served several people in committing crimes, the minor faces a mandatory minimum sentence of three years. Finally, if the minor possessed a weapon for an unlawful purpose or at a school, the penalties increase to a second degree crime if the weapon is a handgun and a third degree offense for bringing the gun to school.

While a minor may never buy a gun, they may have or use a handgun if their parent, guardian, or a licensed firearm or FPIC carrier supervises them. Thus, parents may take their minor children to target practice, or the minor may compete in shooting competitions or participate in target practice with adult supervision. Minors may also use guns while performing military exercises in a military organization with adult supervision or when hunting with an adult licensed hunter who took safety training if the juvenile has a hunting license. 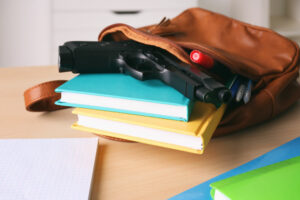 Possible Consequences for Juveniles Caught with Firearms in NJ

Barring supervision, a minor caught with a firearm faces juvenile delinquency adjudication and a hearing to determine whether the state will hold them in a juvenile detention center pending the resolution of their case. A court may retain the juvenile in detention for public safety protection or to ensure the juvenile returns to court. A court retains youngsters who are likely to commit a crime while awaiting the disposition of their case or who are a potential flight risk. Thus, juveniles who commit gun crimes face harsh penalties. With trumped-up charges, a juvenile can face a lengthy sentence at a juvenile detention center or many hours of community service, probation, or monitored supervision.

When Juvenile Cases are Escalated to Criminal Superior Court

Worse, a prosecutor may petition to waive the juvenile’s case from family court to the superior court criminal division. Prosecutors are more likely to seek a waiver for the most serious crimes, like unlawfully possessing a handgun to commit a crime or threatening someone with a gun, leading to aggravated assault charges. If the waiver motion is successful, the state tries the juvenile as an adult for adult crimes. And when the state convicts the juvenile or they voluntarily enter a guilty plea, they face the same penalties as adults: mandatory minimum sentences that require convicted defendants to stay in prison longer before becoming eligible for parole. So, instead of serving a shorter sentence in a juvenile detention center for illegally possessing a weapon, a youth may serve a longer prison sentence if convicted.

While the juvenile justice system seeks to rehabilitate youth who make mistakes or have hard life circumstances, family courts must weigh the severity of the crimes, public safety, and the juvenile’s likelihood of rehabilitation with resources and supervision. Since a minor with a gun faces an unfortunate fate, they need a strong voice to advocate for them. A juvenile defense attorney at our office in Newark with extensive juvenile legal experience is necessary to keep a child out of prison and on the road to a better future. If your child faces the juvenile justice system for a gun crime, talk to our lawyers who can advocate for them from arrest to disposition. Legal representation at a retention hearing increases the chances of your child’s release after arrest. It also decreases the likelihood of a waiver to adult criminal court. When facing juvenile weapons charges in West Orange, Montclair, Fairfield, Essex Fells, Short Hills, or elsewhere in the Essex County area, call us for a no-cost consultation. Discuss your child’s case with a skilled juvenile defense attorney at 201-654-3464 today.