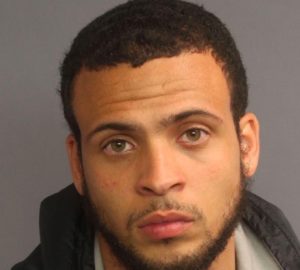 Newark NJ police arrested a local man accused of using a handgun to threaten a woman during an argument.

The suspect is a 23-year-old resident of Newark, New Jersey. According to authorities, the suspect got into a verbal altercation with a woman at an undisclosed location in Newark, NJ. At some point, the suspect allegedly became physically violent and brandished a firearm while threatening the victim.

Afterwards, the victim dialed 911 to notify the Newark Police Department. Newark detectives investigated the violent incident and obtained an arrest warrant for the suspect.

Members of the Newark Police Division Fugitive Apprehension Team eventually located the suspect in Newark NJ and placed him under arrest. He was subsequently charged with numerous criminal offenses, including aggravated assault and terroristic threats. The suspect was also charged with gun crimes for unlawful possession of a weapon and possession of a weapon for an unlawful purpose.

After being arrested and charged, the suspect was remanded to the Essex County Correctional Facility in Newark, New Jersey.

For more information about this case, read the NJ.com article, “Man Charged with Assaulting Woman in Gun Threat Case.”